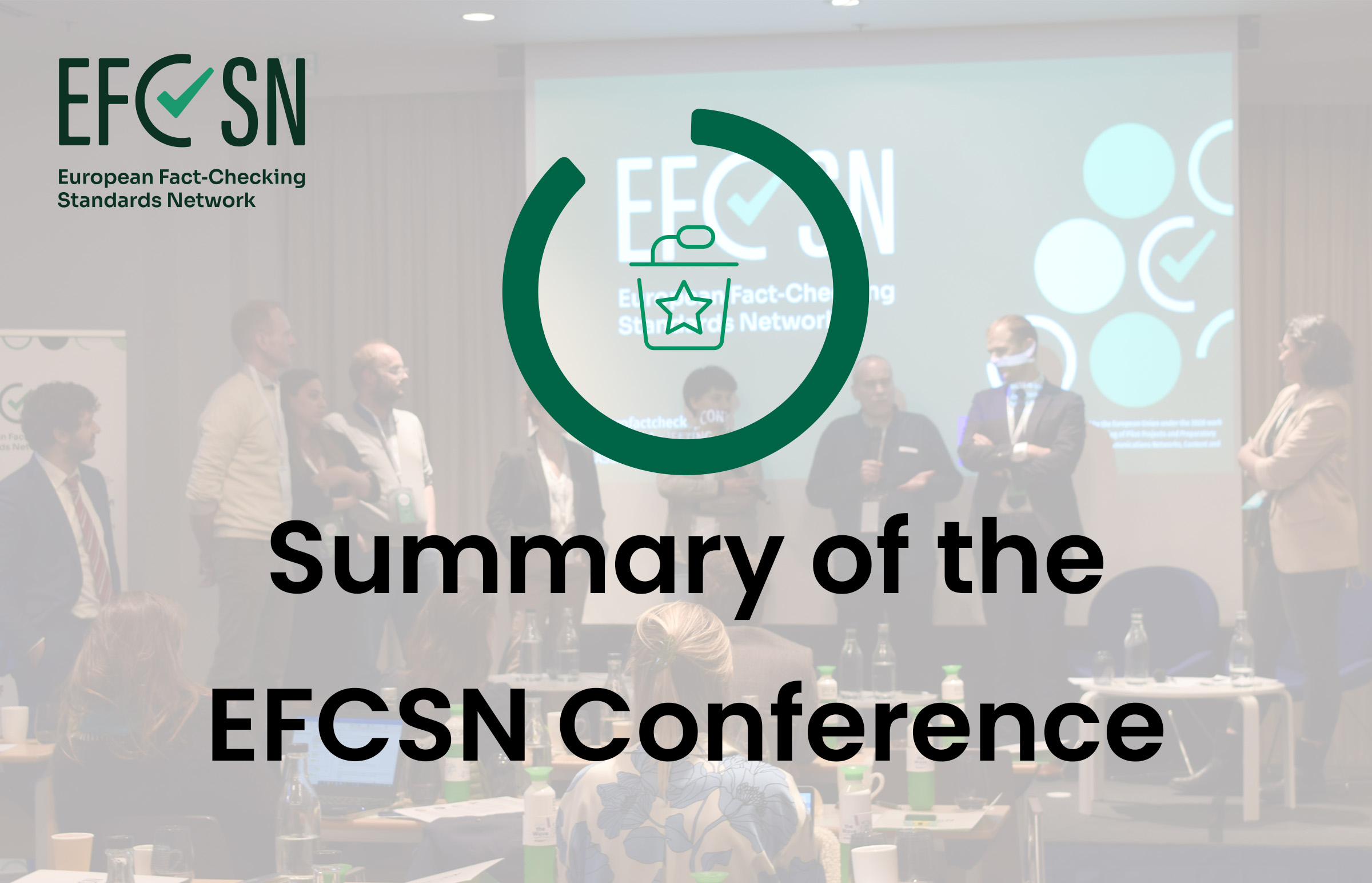 The European Fact-Checking Standards Network (EFCSN) presented its Governance Body and newly-written Code of professional standards at a public event in Brussels on November 16 attended by representatives of EU institutions, digital media platforms and civil society.

The Chair of the EFCSN’s Governance Body, co-founder and CEO of Maldita.es (Spain) Clara Jiménez Cruz, opened the event by outlining the EFCSN’s aims to serve as a representative voice for fact-checkers who meet its standards, which range from matters like non-partisanship to quality sourcing and financial transparency.

The EFCSN is “an organisation that is at the same time extremely demanding, that has pushed its members to strive for excellence and incredibly high standards, but that is also overly inclusive of the experiences of those organisations that were already present in the field,” she said.

“Transparency is our shield against distrust, collaboration is our weapon against disinformation” she added, in allusion to the strict transparency requirements from the Code and the extraordinary capacity for cooperation the fact-checking community has shown over the years and that is formalised with the creation of the EFCSN.

The event included conversations with other stakeholders in the field, such as a panel discussion about the role of fact-checkers in shaping public policy in Europe with Krisztina Stump from the ​​Directorate-General for Communications Networks, Content and Technology of the European Commission (CNECT), the Bulgarian Member of the European Parliament Eva Maydell (PPE), the EFCSN Governance Body members Tommaso Canetta (Pagella Politica, Italy), Gülin Çavuş (teyit, Turkey), David Schraven (CORRECTIV, Germany) and its treasurer Vincent Couronne (Les Surligneurs, France).

Maydell warned about a current “pandemic of disinformation”, though was optimistic that “fact-checkers can inoculate the public with their work and media literacy campaigns”. In addition, Krisztina Stump was confident about new policy efforts on the horizon, such as a Code of Practice that is making new demands of major online platforms to tackle misinformation. “Today we have all the elements in place – with the EFCSN and our Code of Practice – to counter disinformation”, she said.

EFCSN Governance Body members Stefan Voss (dpa, Germany), Ana Brakus (Faktograf, Croatia) and Thomas Hedin (TjekDet, Denmark) also discussed with Sophie Eyears, Meta’s Strategic partner manager for news integrity Europe, the question of if and how European fact-checkers and digital platforms should work together. Eyers noted that “over 190 million pieces of misinformation have been labelled thanks to the partnership programme with the fact-checking organisations”, something that Meta could not have achieved without the fact-checking community. Google representatives were expected as speakers but unable to attend due to unforeseeable events

Governance Body member Ana Brakus also called on platforms to be more transparent about their efforts and put more resources into countering misinformation. She emphasised that “platforms can improve the infosphere, but they need to decide to really do so” and urged them to “use your resources to create something good”.

The conference was closed with a keynote speech from Delphine Colard, the Head of Spokesperson’s Unit and Deputy Spokesperson of the European Parliament. She underlined the European Union’s aim to further promote democracy and truth and mentioned that “the war of disinformation from the Kremlin shows how dangerous disinformation and propaganda are”. She added that “fact-checkers are like referees to ensure a fair game”.

Governance Body members are also meeting  with individual members of different Permanent Representations of European member states this week to present the EFCSN, its Code and objectives.

This project is part of the Call of Integrity of Social Media by the European Commission and is led by six European organisations focused on fighting misinformation: Fundación Maldita.es (Spain), AFP (France), CORRECTIV (Germany), DEMAGOG (Poland), Pagella Politica/Facta (Italy) and EU DisinfoLab (Belgium).
Read more about the EFCSN on our website. Follow the EFCSN’s Twitter and LinkedIn for regular updates on this project.